An article published this year in “Journal of International Natural Products” using one of our products, “FITC Apoptosis Detection Kit”, by our customers from the CRIOBE, USR CNRS-EPHE-UPVD, Universitéde Perpignan, France and Universidad de Santiago de Compostela, Lugo, Spain in how Structures and Activities of Tiahuramides A−C, Cyclic Depsipeptides from a Tahitian Collection of the Marine Cyanobacterium Lyngbya majuscula. Congrats and Thanks.

Summay:
The structures of three new cyclic depsipeptides, tiahuramides A (1), B (2), and C (3), from a French Polynesian collection of the marine cyanobacterium Lyngbya majuscula are described. The planar structures of these compounds were established by a combination of mass spectrometry and 1D and 2D NMR experiments. Absolute configurations of natural and nonproteinogenic amino acids were determined through a combination of acid hydrolysis, derivitization with Marfey’s reagent, and HPLC. The absolute configuration of hydroxy acids was confirmed by Mosher’s method. The antibacterial activities of tiahuramides against three marine bacteria were evaluated. Compound 3 was the most active compound of the series, with an MIC of 6.7 μM on one of the three tested bacteria. The three peptides inhibit the first cell division of sea urchin fertilized eggs with IC50 values in the range from 3.9 to 11 μM. Tiahuramide B (2), the most potent compound, causes cellular alteration characteristics of apoptotic cells, blebbing, DNA condensation, and fragmentation, already at the first egg cleavage. The cytotoxic activity of compounds 1−3 was tested in SH-SY5Y human neuroblastoma cells. Compounds 2 and 3 showed an IC50 of 14 and 6.0 μM, respectively, whereas compound 1 displayed no toxicity in this cell line at 100 μM. To determine the type of cell death induced by tiahuramide C (3), SH-SY5Y cells were costained with annexin V−FITC and propidium iodide and analyzed by flow cytometry. The double staining indicated that the cytotoxicity of compound 3 in this cell line is produced by necrosis. 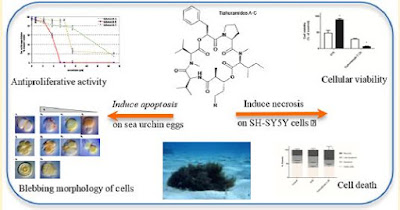 Posted by IMMUNOSTEP at 07:58 No comments:

An article published this year in “International Journal of Molecular Sciences” using one of our products, “FITC Apoptosis Detection Kit”, by our customers from the Department of Medicine, Surgery and Health Sciences, University of Trieste, 34149 Trieste, Italy, in how Neuronal Dysfunction Associated with Cholesterol Deregulation. Congrats and Thanks.

Summay:
Cholesterol metabolism is crucial for cells and, in particular, its biosynthesis in the central nervous system occurs in situ, and its deregulation involves morphological changes that cause functional variations and trigger programmed cell death. The pathogenesis of rare diseases, such as Mevalonate Kinase Deficiency or Smith–Lemli–Opitz Syndrome, arises due to enzymatic defects in the cholesterol metabolic pathways, resulting in a shortage of downstream products. The most severe clinical manifestations of these diseases appear as neurological defects. Expanding the knowledge of this biological mechanism will be useful for identifying potential targets and preventing neuronal damage. Several studies have demonstrated that deregulation of the cholesterol pathway induces mitochondrial dysfunction as the result of respiratory chain damage. We set out to determine whether mitochondrial damage may be prevented by using protective mitochondria-targeted compounds, such as MitoQ, in a neuronal cell line treated with a statin to induce a biochemical block of the cholesterol pathway. Evidence from the literature suggests that mitochondria play a crucial role in the apoptotic mechanism secondary to blocking the cholesterol pathway. Our study shows that MitoQ, administered as a preventive agent, could counteract the cell damage induced by statins in the early stages, but its protective role fades over time. 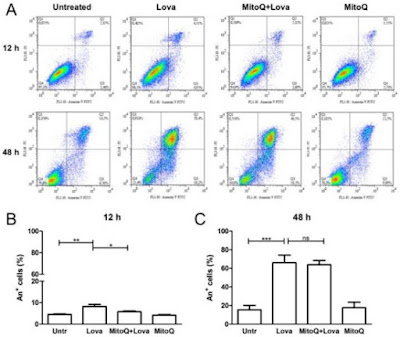 Posted by IMMUNOSTEP at 07:48 No comments:

An article published this year in “Journal of Nanabiotechnology” using one of our products, “Purified Mouse Anti-Human CD9”, by our customers from the Universidade da Coruña, DICOMOSA Group, Department of Psychology, Area of Psychobiology, Edificio de Servicios Centrales de Investigación, A Coruña, Spain, in how Toxicological assessment of silica-coated iron oxide nanoparticles in human astrocytes.  Congrats and Thanks.

Summay:
Tumour-derived exosomes can be released to serum and provide information on the features of the malignancy, however, in order to perform systematic studies in biological samples, faster diagnostic techniques are needed, especially for detection of low abundance proteins. Most human cancer cells are positive for at least one ligand for the activating immune receptor NKG2D and the presence in plasma of NKG2D-ligands can be associated with prognosis.

Characterization of exosomes from metastatic melanoma cell lines. Exosomes from Ma-Mel-86c cells were purified from tissue culture supernatant by ultracentrifugation. a TEM. Exosomes were analyzed by electron microscopy. Bar: 100 nm. b Western blot. MICA and tetraspanins (CD63, CD81 and CD9) were analysed by Western blot. Actin was used as loading control. The result from a representative experiment is shown. An exposure of 10–15 s is shown in the right panel. c NKG2D downmodulation. Activated NK cells were co-incubated with increasing amounts of Ma-Mel-86c exosomes as indicated. Cells were stained with anti-NKG2D and analysed by flow cytometry. The plot represents the change in the mean fluorescence intensity (MFI) of NKG2D on NK cells after incubation with exosomes, related to NK cells incubated in medium alone. Data are the mean and SEM obtained in three experiments using NK cells from different donors (*P < 0.05)
Reference:
https://jnanobiotechnology.biomedcentral.com/articles/10.1186/s12951-018-0372-z

Posted by IMMUNOSTEP at 07:35 No comments:

An article published this year in “Food and Chemical Toxicology” using one of our products, “FITC AnnexinV Apoptosis Detection Kit”, by our customers from the Universidade da Coruña, DICOMOSA Group, Department of Psychology, Area of Psychobiology, Edificio de Servicios Centrales de Investigación, A Coruña, Spain, in how Toxicological assessment of silica-coated iron oxide nanoparticles in human astrocytes.  Congrats and Thanks.

Summay:
Iron oxide nanoparticles (ION) have great potential for an increasing number of medical and biological applications, particularly those focused on nervous system. Although ION seem to be biocompatible and present low toxicity, it is imperative to unveil the potential risk for the nervous system associated to their exposure, especially because current data on ION effects on human nervous cells are scarce. Thus, in the present study potential toxicity associated with silica-coated ION (S-ION) exposure was evaluated on human A172 glioblastoma cells. To this aim, a complete toxicological screening testing several exposure times (3 and 24 h), nanoparticle concentrations (5–100 μg/ml), and culture media (complete and serum-free) was performed to firstly assess S-ION effects at different levels, including cytotoxicity – lactate dehydrogenase assay, analysis of cell cycle and cell death production – and genotoxicity – H2AX phosphorylation assessment, comet assay, micronucleus test and DNA repair competence assay. Results obtained showed that S-ION exhibit certain cytotoxicity, especially in serum-free medium, related to cell cycle disruption and cell death induction. However, scarce genotoxic effects and no alteration of the DNA repair process were observed. Results obtained in this work contribute to increase the knowledge on the impact of ION on the human nervous system cells. 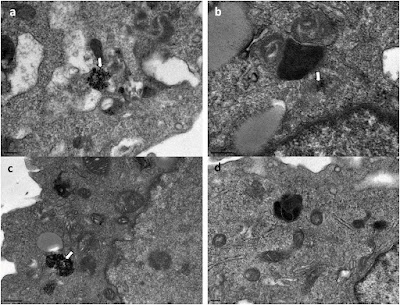 Fig. Transmission electron micrographs of A172 cells incubated with 100 μg/ml of S-ION for 3 h in complete (a) and serum-free (b) medium, and for 24 h in complete (c) medium, showing nanoparticleinternalization (arrows indicate S-ION agglomerates). (d) Control A172 cells (not exposed to S-ION). All scale bars (down left side) are 0.5 μm long.

An article published this year in “Redox Biology” using one of our products, “PE AnnexinV”, by our customers from the  Instituto de Investigaciones Biomédicas Alberto Sols (CSIC-UAM), Madrid, Spain in how Protection against gamma-radiation injury by protein tyrosine phosphatase 1B. Congrats and Thanks.

Summay:
Protein tyrosine phosphatase 1B (PTP1B) is widely expressed in mammalian tissues, in particular in immune cells, and plays a pleiotropic role in dephosphorylating many substrates. Moreover, PTP1B expression is enhanced in response to pro-inflammatory stimuli and to different cell stressors. Taking advantage of the use of mice deficient in PTP1B we have investigated the effect of γ-radiation in these animals and found enhanced lethality and decreased respiratory exchange ratio vs. the corresponding wild type animals. Using bone-marrow derived macrophages and mouse embryonic fibroblasts (MEFs) from wild-type and PTP1B-deficient mice, we observed a differential response to various cell stressors. PTP1B-deficient macrophages exhibited an enhanced response to γ-radiation, UV-light, LPS and S-nitroso-glutathione. Macrophages exposed to γ-radiation show DNA damage and fragmentation, increased ROS production, a lack in GSH elevation and enhanced acidic β-galactosidase activity. Interestingly, these differences were not observed in MEFs. Differential gene expression analysis of WT and KO macrophages revealed that the main pathways affected after irradiation were an up-regulation of protein secretion, TGF-β signaling and angiogenesis among other, and downregulation of Myc targets and Hedgehog signaling. These results demonstrate a key role for PTP1B in the protection against the cytotoxicity of irradiation in intact animal and in macrophages, which might be therapeutically relevant.

Posted by IMMUNOSTEP at 06:56 No comments:

An article published this year in “PlosOne” using one of our products, “PerCP Mouse anti-Human CD4”, by our customers from the  Immunology Department, Hospital Universitario Central de Asturias (HUCA), Oviedo, Spain,  In how Levels of anti-CMV antibodies are modulated by the frequency and intensity of virus reactivations in kidney transplant patients. Congrats and Thanks.

Summay:
Anti-CMV (cytomegalovirus) antibody titers are related to immune alterations and increased risk of mortality. To test whether they represent a marker of infection history, we analyzed the effect of viral reactivations on the production of specific antibodies in kidney transplant patients. We quantified CMV-DNAemia and antibody titers in 58 kidney transplant patients before transplantation and during a follow-up of 315 days (standard deviation, SD: 134.5 days). In order to calculate the intensity of the infection, we plotted the follow-up time of the infection on the x-axis and the number of DNA-CMV copies on the y-axis and calculated the area under the curve (CMV-AUC). The degree of T-lymphocyte differentiation was analyzed with flow cytometry, the cells were labelled with different monoclonal antibodies in order to distinguish their differentiation state, from naive T-cells to senescent T-cells. Peak viremia was significantly higher in patients experiencing a primary infection (VI) compared to patients experiencing viral reactivation (VR). Our data indicate that the overall CMV viral load over the course of a primary infection is significantly higher than in a reactivation of a previously established infection. Whereas patients who experienced an episode of CMV reactivation during the course of our observation showed increased levels of CMV-specific antibodies, patients who did not experience CMV reactivation (WVR) showed a drop in CMV antibody levels that corresponds to an overall drop in antibody levels, probably due to the continuing immunosuppression after the renal transplant. We found a positive correlation between the CMV viremia over the course of the infection or reactivation and the CMV-specific antibody titers in the examined patients. We also observed a positive correlation between anti-CMV titers and T-cell differentiation. In conclusion, our data show that anti-CMV antibody titers are related to the course of CMV infection in kidney transplant patients. 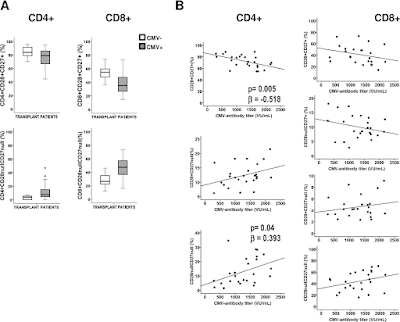 Fig. Differentiation status of CD4+ and CD8+ T-lymphocytes according to CMV serostatus and anti-CMV antibody levels.

Posted by IMMUNOSTEP at 05:12 No comments:

Summay:
Undiluted Equia Forte extracts led to a similar cell proliferation rates than the control group from 72 h onwards. There were no significance differences between Equia Forte and Ionostar Molar in terms of cell apoptosis and phenotype. However, in presence of Equia extracts the migration capacity of hDPSCs was higher than in presence of Ionostar Molar (p < 0.05). Also, SEM studies showed a higher degree of cell attachment when Equia Forte extracts were used. Finally, EDX analysis pointed to different weight percentages of C, O and Ca ions in glass ionomer cements, while other elements such as La, Al, Si, W, Mo and F were also detected. 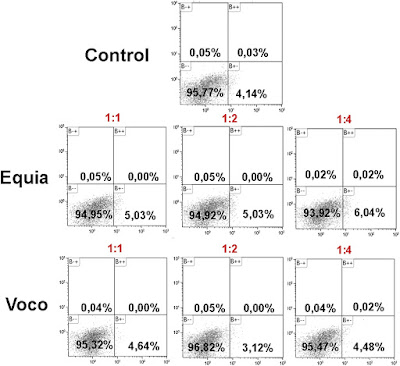 Fig. 4. hDPSCs were cultured on Equia Forte, Ionostar Molar and plastic (control) for 72 h, after which the cells were labelled with Annexin-V and 7-AAD and analysed by flow cytometry. Numbers within the different quadrants represent the percentages of live (Annexin-V−/7-AAD−), early apoptotic (Annexin-V+/7-AAD−) or late apoptotic and necrotic cells (Annexin-V+/7-AAD+ and Annexin-V−/7-AAD+). Dot-plots display representative flow cytometry results obtained after three independent experiments.

Posted by IMMUNOSTEP at 05:04 No comments: